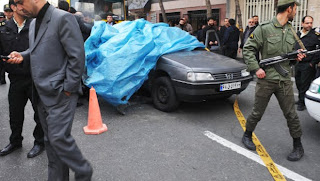 The killing of Iranian professor Mostafa Ahmadi Roshan on Wednesday was the latest in a series of hits on scientists who are linked to the Islamic Republic's nuclear program, which Israel and other Western nations are desperately trying to halt.
According to Iranian media reports, the incident, which took place at the Seyed Khandan neighborhood in northern Tehran, "looks similar to attacks on nuclear scientists in the city," more than one year ago.
Tehran's deputy governor was quick to say that Israel was behind the "assassination… aimed at militarizing the (diplomatic) situation, and disrupt the elections in Iran.”
American blogger Richard Silverstein claimed that a senior Israeli source "with great political and military experience" told him that the Mossad carried out the hit along with Iranian opposition group the People's Mujahedin of Iran (PMOI).
In addition to the targeted killings of scientists, the three explosions which took place in Iran within a month towards the end of 2011 indicate that some element has already waged a military campaign against Tehran.
On December 12 Iranian media outlets reported that 16 people were killed in an explosion at a steel factory. 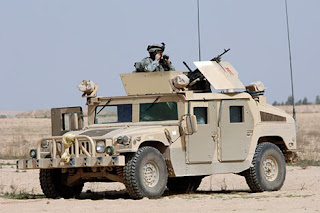 The IDF is soon to purchase 2,500 Hummer vehicles, trucks and other equipment from the United States military, Yedioth Ahronoth reported Sunday.
Top IDF officials have recently travelled to the US and reached a preliminary agreement on the deal, which includes gear used during US engagements in Iraq and Afghanistan.
Defense establishment sources noted Saturday that the purchase is worthwhile for Israel, as the payment for the gear would be taken out of the military aid provided by the US to the Jewish state.
If the deal goes through, the reportedly low-mileage Hummers and trucks will arrive in Israel and undergo testing before being stored away in the IDF's emergency warehouses.
The US pulled out its last convoy of troops from Iraq in December, and has set an aggressive timetable for withdrawing its forces from Afghanistan has well.
The IDF said on Thursday that it is gearing up towards a joint missile defense drill with US. Both nations said the exercise is expected to be the largest of its kind so far. While the maneuver's date is yet to be announced, a senior IDF official said it is to take place within the next few weeks.